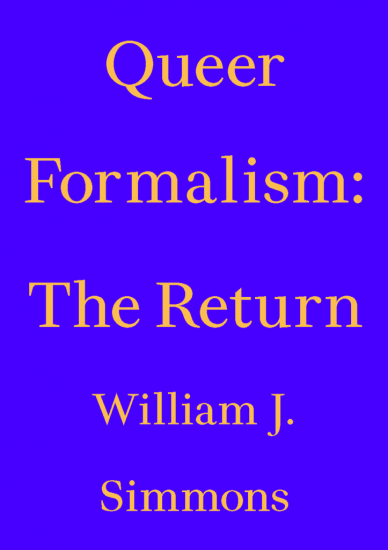 New book Queer Formalism: The Return by William J. Simmons is the first installment in the Critic’s Essay Series published by Floating Opera Press. Comprising long-form essays, this series gives voice to critics who offer thought-provoking ways in which to subvert or replace normative modes of discussing culture.

Queer Formalism: The Return expands upon William J. Simmons’s influential essay “Notes on Queer Formalism” from 2013 – originally published in Big, Red, and Shiny – offering novel ways of thinking about queer-feminist art outside of the critical-complicit and abstract-representational binaries that continue to haunt contemporary queer art. It therefore proposes a new kind of queer art writing, one that skirts the limits imposed by normative histories of art and film.

William J. Simmons was one of the speakers at FAST FORWARD: HOW DO WOMEN WORK? conference at Tate Modern in November, 2019.